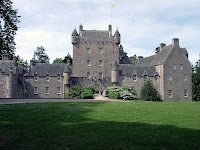 Lochaber. Now THAT's definitely the Highlands. Despite much of it being at sea level!
See also my post on the Clans of Lochaber.

My family crest is on a flag flying at Cawdor Castle and as my ancestor is Duncan Campbell McPhail, I suppose there is more family history there for me! Do you have any suggestions as to how I can research that connection? THis is SO exciting and I want more than ever to come visit The Highlands. I fly the Scottish flag at my home in Harrisburg, NC proudly! Deb Callahan

Concerning genealogy, you may like to have a look at http://www.genealogics.org/ahnentafel10.php?personID=I00212621&tree=LEO&parentset=0&generations=10

The flag at Cawdor Castle shows a Gyronny of Eight, Galley of Lorne and Hart’s Head. The crest also includes three buckles. Which part is your family crest? Or is the same?