The Munros of Novar

On a hill overlooking the Cromarty Firth is a striking, most un-highland monument. I guess that travellers must have been wondering what on earth it is ever since its erection in 1782. In fact it is a replica of the gates of Negapatam in South East India - originally a Dutch colony, won by the British in 1781. 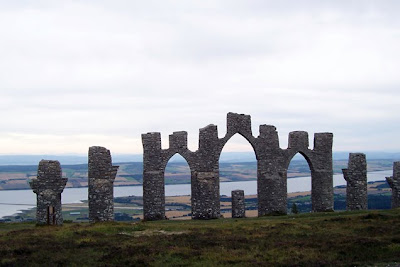 Responsible for this success was Sir Hector Munro, 8th of Novar (1726 - 1805) who won fame and fortune as a British Army Officer in India. When he retired to Scotland the following year he found that in the midst of the Highland Clearances many Munros and others in the area were unemployed and hungry, so he paid them all to carry stones to the top of Cnoc Fyrish where the monument to celebrate his triumph was erected.

Tragically, Sir Hector's two sons were both killed in India, one by a tiger and one by a shark in the Bay of Bengal and the estate passed to his daughter whose descendants still own it.

And, until yesterday, that was all I knew of the Munros of Novar. 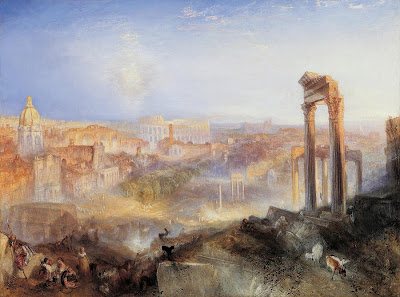 I now learn that Sir Hector's nephew, Hugh Anderson Johnstone Munro of Novar was one of the most notable art collectors of his day and a close friend of the English artist J. M. W. Turner. Munro eventually owned fifteen oil paintings by Turner and one hundred and nine of his water colours. One of his favourites, 'Modern Rome - Campo Vaccino' was sold by Munro's heirs in 1878 to the Earl of Roseberry for the astonishing price (at that time) of 4,450 guineas. It comes under the hammer for the second time tomorrow in a Sotheby's sale in London with an estimate of £12-18 million.

A blow, though, for the National Gallery of Scotland, to whom it has been on loan since 1978.

What a wonderful story to read...love the painting..
Erna

The Turner painting actually made just less than £30 million!