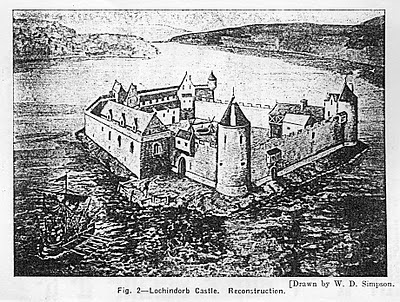 By 1456 the castle was under the control of Archibald Douglas, Earl of Moray, who 'munitioned and fortified it against the king'. King James II, having taught the Douglases a lesson, then instructed the Thane of Cawdor to dismantle the castle. This he did, assuming possession of Lochindorb's 'yett' an impressive iron gate which can still be seen outside the Thorn Tree Room in Cawdor Castle.
The only disappointment of the evening was that these cautious academics refuse to accept that a foot beneath the water here was a causeway out to the island and that only the owners (and their horses) knew which way it twisted and turned. I, for one, am not going to let a nice story like that fade away: we must get out there and find it next summer!

Just found this article when searching for info on Lochindorb. Has your trip to find the causeway transpired?

Weather has not yet been sufficiently favourable for highland loch swimming!

There never was a causeway at Lochindorb castle

Thanks for this. It always seemed a little unlikely but what is your evidence?

Hello. On a flight from London to Inverness a couple of years ago, we passed over the castle and I took a photograph which clearly shows a road/causeway from the shore to the castle. I will try and find it and post it. Keir Hardie. Forres. Moray.

MacOogle - would very much like to see it. Fascinating.

Hello.I found 2 photos I took in winter from a plane from London to Inverness showing the causeways. My email is keirhardie@rocketmail.com Email me and I`ll send them back to you. Ta.

We stayed at a house on Dava Moor which was located right on Lochindorb. It is so beautiful there-- almost unearthly. Looking at this castle every morning from our window was amazing. We bought a blow up mattress and paddled to the castle to take a look around. The walls are in amazingly good shape but the ground is uneven due to the falling stones from years gone by. Lots of stinging nettles... but we stood on the wall and touched history. It's an incredible place. Don't know about a causeway ... but it seems odd that they could have carried stones of that size from the shore out to the island on which most of the castle sits. I guess they used some kind of ferry system with logs. If you ever get a chance---go!! It was my favorite area of Scotland other than the Isle of Skye. I will go back someday. We were there for seven marvelous days before moving on to Edinburgh.

Hello I have definitive proof that Lochindorb was originally built on dry land and I have notified several bodies to whom the info may be of interest. email me at keirhardie@rocketmail.com for free photos to prove my point. Cheers

Hello. The H.E.S. have agreed with my investigations and allowed me to add them to their Cranmore page online. Anyone wanting free photos of my proof that the castle was built, originally, upon dry land can do so via my whatsapp onmy mobile 0793 2645 822. Its certainly an island now - but didnt start as one.