Every good tour guide knows Aldourie Castle - it's the fanfare of towers and turrets seen across Loch Ness for about ten seconds before it disappears again. Apart from ruined Urquhart, Aldourie is the only castle on Loch Ness but for years tour guides have not known what to say about its present state: it was privately owned by Angus and Judy Cameron until 2002 and then sold to some Americans who did nothing with it. 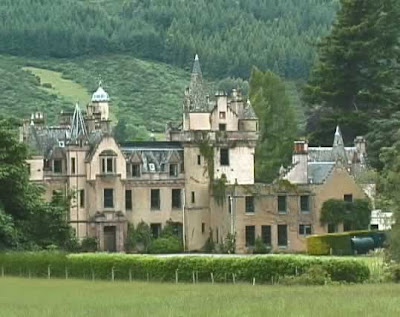 I was there yesterday with three of my Scottish Clans and Castles colleagues and can report that Aldourie is now embarked on the most amazing rebirth. Furniture, fittings and thousands of books are all in store whilst the castle is gutted and reorganised as a dramatic 'exclusive use' venue. Quite unusually, the English owners are passionate about restoring the castle to recall its Victorian glory - the time when the Fraser Tytler family entertained with great style in their very fashionable Scottish Baronial castle, recently created from a traditional laird's house, built by the Dunbar family in the 17th century.

We stood on the battlements and looked at Loch Ness through diverging vistas of mature trees. We went through a lychgate to see the private graveyard in the woods. We admired the arboretum and three massive dilapidated greenhouses flanking an enormous kitchen garden. All of this is being restored.

There is no doubt that the revitalised Aldourie Castle will again see entertainment in great style. If you would like to book Aldourie for a family or business event, just let us know.

Happy New Year! What a remarkable place. Another good reason to return to Scotland.

Hapy New Year to you! We look forward to seeing you and your camera over here again soon!