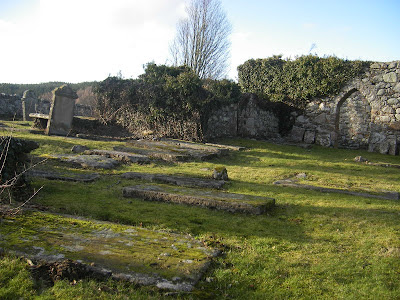 Spring has come early to Nairnshire. Today I bicycled out to one of my favourite spots, Barevan Kirk. Now a ruin, it was built in the 13th century on a site which had probably seen Christian worship since the days of St Columba in the 6th century. As you may see, Barevan is full of old gravestones; many of the inscriptions are irregular, like those cut by children into the trunks of old beech trees.

The most evocative tombstone in the kirk yard is that of Elizabeth Campbell of Clunas. Beautiful and well educated, she was born in Rome where her father was living in exile following his part in the 1715 Rising. She was engaged to tall, red-headed Alexander MacGillivray of Dunmaglass who led Clan Chattan at the Battle of Culloden; and since Clan Chattan was the first clan to charge in that well-documented disaster, he led the last ever Highland Charge. Every tourist visiting the battlefield walks past his memorial stone by the 'Well of the Dead'.

It may be that Elizabeth was also one of those local ladies who watched the battle. It is certain that some time afterwards, she bribed the picquets to release MacGillivray's body which was then buried in nearby Petty kirk yard. Elizabeth, aged 24, survived MacGillivray by just four months. 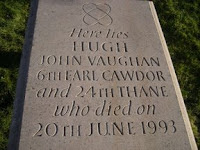 Just outside the kirk yard is a new private burial ground in which the late Lord Cawdor, father of the present earl, lies buried. He converted to Roman Catholicism late in life and thereby lies a longer story.
No comments: 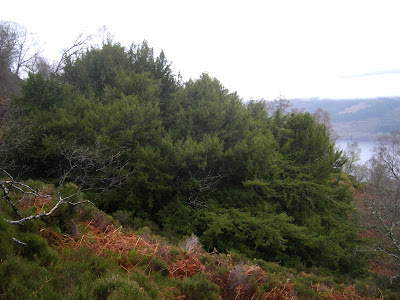 It is often thought that clansmen were recognised by their tartan. Not so. Tartans reflected regional preferences and the local availability of dyes. But all clansmen wore a plant badge: the MacDonalds heather, the Robertsons bracken, the Campbells bog myrtle and the Frasers wore yew. The significance of the Frasers' choice was lost on me until this last weekend when I walked out with some fellow guides to the Great Fraser Yew on the south side of Loch Ness. The Frasers arrived in the Highlands in the fourteenth century and the yew had already been there for about one thousand years by then. Young yew trees grow up around their dying parents and so, if left undisturbed, each tree will steadily expand. The Great Fraser Yew is now more than thirty yards in diameter. 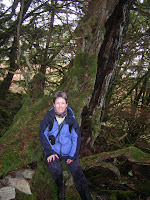 The old trunk is hollow, moss covered, crumbling away. But its offspring form a cathedral around it. A hundred clansmen could gather here unseen. And this was indeed the principal gathering place for the Frasers of Stratherrick. How natural that, before a battle, they should put a sprig of yew in their bonnets as a symbol of fraternity; an impromptu idea perhaps, now enshrined in clan lore.

The walk in takes an hour or so over some fairly rough country. But there are rewards there, especially for Frasers; rewards that go beyond the lovely views of Loch Ness, the eerie uniqueness of the ancient tree, and the distant sound of men responding to a call to arms. To know more you need to go.
5 comments: 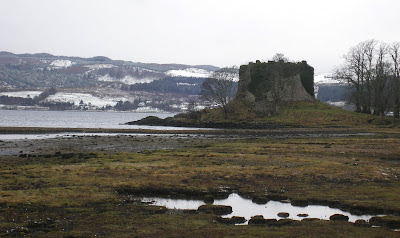 I was by Loch Fyne this weekend, a place which prompts thoughts of oysters, (the world's best, they say) and of Campbells (for many years Scotland's most influential clan) . Inveraray Castle, seat of the Duke of Argyll, Chief of Clan Campbell, dominated this area before there was even a road from the rest of Scotland. And the clan, which steadfastly opposed the Jacobites, was similarly dominant throughout Argyll. 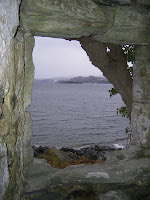 It was therefore bold, to say the least, of Clan MacLachlan a small clan with lands on the opposite side of the loch, to support the Jacobite Risings in 1689, 1715 and 1745. The seventeenth chief led his clan at the Battle of Culloden and was shot off his horse by a canon ball. It is said that the news of the battle was brought to Strathlachlan by the dead chief's riderless horse.

As punishment for joining the rising, Castle Lachlan, surrounded on three sides by the sea, was bombarded by the Royal Navy. It is now an evocative, and puzzling, ruin - an old 15th century keep to which two significant towers have been added and an internal courtyard formed. Windows have become doors and latrines perhaps turned into chimneys. And for those not intrigued by architectural history, the views of Loch Fyne are stunning. Well worth a visit. 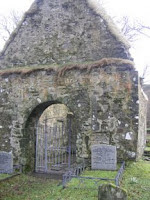 Close by is Kilmorie Chapel where
the MacLachlan chiefs are buried.
The gravestone of Marjory MacLachlan, the 24th chief, is shown in this picture.
No comments: