Lord James Douglas, who died in 1645 aged just 28, is buried in the church of Saint-Germain-des-Prés, Paris. Wandering through the church recently I was amazed to see the graves of both Lord James and his grandfather, 10th Earl of Angus (another interesting story). Not just graves but, in the case of Lord James, a massive monument in its own chapel, with a sculpture of him in white marble, all funded by King Louis XIV at a cost of 2900 livres. Anyone who has visited Versailles knows that Louis was a big spender, but to spend close on a million pounds commemorating a 28 year old foreigner...


Lord James, born at Douglas Castle in Lanarkshire, was “at an early age” a page in the court of Louis XIII of France. His father, a committed Roman Catholic in a predominantly protestant country, clearly didn’t enjoy life in the ruthless (and often rule-less) world of the South of Scotland. He was embroiled in a long legal dispute with the rough and reiving Kers of Ferniehirst over rights to hold courts in Jedforest, his brother was remanded in prison at Blackness Castle for threatening one of the Kers. It was all too much for this quiet and rather unhealthy earl. He left his estates to be looked after by others and lived for many years in France where he could practice his religion in peace and not be plagued by Border lairds.


His son Lord James was made of different stuff. He worked his way up in the French court and at the age of twenty, was appointed colonel of the ‘Scots Regiment’, which had been raised four years earlier in Scotland and was bound to King Louis, "in all service except against the King of Great Britain”. (The Auld Alliance in action).

This was the time of the 30 Years War and the regiment, now titled the Régiment de Douglas, took part in the siege of St. Omer in the Spanish Netherlands, fought in Piedmont under the Prince of Savoy, participated in the successful siege of Turin, and was then back in the Spanish Netherlands at the siege of Gravelines. The regiment 'fought with distinction' and its strength was increased to twenty companies of one hundred men each.  Lord James, however, was killed in a skirmish near Douai on 21 October 1645 during an attempt to take it from the Hapsburgs. On the very day of his death Louis XIV had indicated his wish to give him a Field-Marshal's baton.

Douglas was succeeded as colonel by his elder brother, Archibald Douglas, Earl of Angus. The Régiment de Douglas returned to British service in 1662, and in 1812 took its more famous name: The Royal Scots. 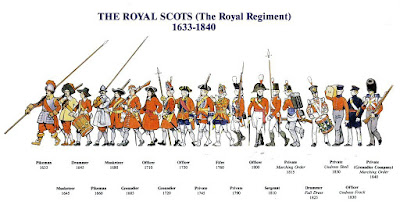