I had a tour today of the very new Highland Archive Centre in Inverness: four large temperature and humidity controlled rooms house a mass of maps, records, letters, books, some dating from the 15th century. This is now the official depository for most of the records

in the Highlands, but there are also large leatherbound volumes recording deaths, wills and landholdings throughout Scotland together with 'Burke's Peerage' and records of Scottish landed gentry. Out of curiosity I looked up a distant aristocratic ancestor who was apparently notable for having been rowdy in a Lyon théatre in 1768: he refused to shut up and accepted the offer of a duel in the foyer where both men were apparently run through but neither died! Of more general interest perhaps is the Family History Centre, full of clan and family histories. Staff are on hand to help, and you can make an appointment with the Highland Council Genealogist. But note that the centre is not open at weekends.

I've had a fascinating couple of days at 'Scotland's Global Impact' Conference in Inverness. I expected to learn more about well... the words in the title, but I didn't really expect to be re-educated on the origin of well-kent words.

I always thought 'Alba' was a deep-rooted, chest-puffing term for ancient Scotland. I enjoy explaining to clients that Sassenach are Southerners and by contrast, Albannach are us - Scots, Highlanders, Celts. Not a bit of it! I learnt yesterday (from Dr James Fraser of the School of Celtic and Scottish Studies at Edinburgh University) that Alba actually means Britain, the whole island. Hence, I suppose, 'perfidious Albion', a well established epithet for England, perhaps due to the white (albus) cliffs of Dover. Viewed, as this island was, by Gaels from Ireland, I suppose this all makes sense.

I did actually know that 'Welsh' (also Walsh and Wallace) means foreigners. But I didn't know that "Wales" originates from the Germanic word Wahl which referred to foreigners who had been "Romanised".

Talking of Romanisation, James Fraser also explained that Britons in the South of Scotland (south of the Antonine Wall) were proud to be thought 'Romanised'. Even after the Romans had left. Some legacy!

In the tenth century 'Alba' came to mean the nation of Picts and Gaels. And in the afternoon we, too, moved into the Middle Ages. Masses of interesting thoughts and stories, but no etymological shocks.
No comments:

The Stone of the Maiden

It has been a lovely bright autumn weekend and I took a walk to a local landmark called the 'Stone of the Maiden'. Lying in the dappled sunlight of a larch wood, this extraordinary rock, a mass of small stones bound together many millions of years ago, played a key role in Nairnshire's 16th century version of Romeo and Juliet. This was the stone where the lovers would meet prior to the tragic denouement, ultimately played out at Rait Castle. 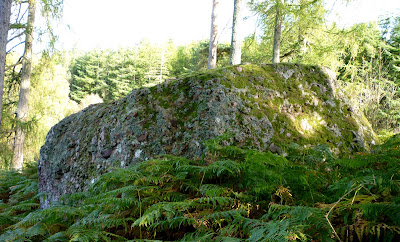 The gist is that an attempt by the Comyns of Rait to murder their neighbours the MacKintoshes by inviting them to dinner at Rait was dramatically reversed, thanks to two young lovers. The story is told in full on my Save Rait Castle site.

Three questions remain in my mind...

1. How do you cut off both of a young girl's hands when she is hanging out of a window?
2. Why did the MacKintoshes leave the castle to become ruinous and not take it over when it was available to them in 1442?
3. Why do the Custodians of Scotland's architectural heritage continue to allow this, the best standing example of a 13th century Scottish Hall House, to be overtaken by the surrounding undergrowth? 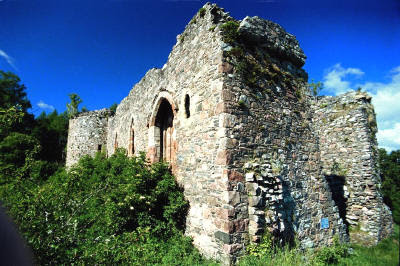