The MacKinnons arrived on Skye in the early 14th century. The clan chief followed about two hundred years later after some local difficulty on Mull where the MacKinnon chiefs had been hereditary Abbots of Iona and Standard Bearers to the Lords of the Isles
A MacKinnon from Canada was in the ancient clan lands on Skye with her husband and family on Tuesday.

We went to Kilmarie and so out to Dun Ringill, a dramatic cliff-top ruin and the clan's principal castle until the later 15th century. Rory got stung by nettles in the 2000 year old doorway, Mark discovered how they barred the door, Deanna found white heather and Denise learnt a little more Gaelic: Dùn ruabh mòr-ghil, the fort at the point of the ravine.

On the way we saw the the burial place of the MacKinnons of Strathaird at Cill Chriosd.... 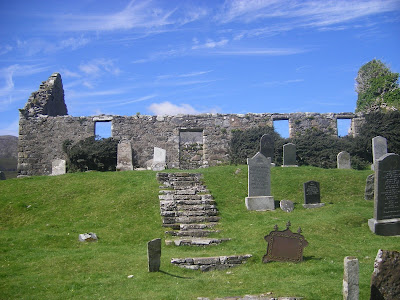 Sadly the clan has not been a presence on Skye for 250 years. In 1746 the chief, Iain Og (that's 'Young Iain', Denise) helped Prince Charles Edward escape to the mainland. For his pains he was apparently given exclusive access to the recipe for Drambuie , but also spent four years on a prison ship in the Thames. His son sold the MacKinnon lands to pay off debts in 1765.

I'll leave the last word to Ian Anderson of Jethro Tull who used to own the land at Kilmarie:

..We'll wait in stone circles 'til the force comes through
lines joint in faint discord and the stormwatch brews
a concert of kings as the white sea snaps
at the heels of a soft prayer whispered
In the wee hours I'll meet you down by Dun Ringill...