Nairn is one of the World's Top Five Travel Destinations for 2010!

I am delighted, privileged even, to be writing from Nairn, one of the top five travel destinations in the world! And no, this is not as voted by the Association of Nairn Businesses but according to the all knowing Tripadvisor. In the days of Charlie Chaplin Nairn was known as the 'Riviera of the North'; it doesn't look quite like that today with five inches of snow on the ground, but this news will be heartening to Ian Bochel of Nairn's excellent Sunny Brae Hotel and Iain Fairweather who doughtily promotes Nairn via www.visitnairn.com and took the excellent photo above.

Disappointing that neither Fodor's nor Lonely Planet have warmed to Nairn's charms but they don't even put Scotland in their top ten so what the hell do they know! They'll catch on one day.

We all look forward to welcoming you to Nairn.
1 comment:

It's a lovely time of year.

Not just the frost (picture taken yesterday) and festive stuff, but those of us lucky enough to be running holiday companies have a few minutes to ponder: 2009 holidays are done and only a few people are embarked on next year's arrangements. Of course there is still plenty to do, but I allow myself to pursue the occasional 'red herring' . A Canadian client wrote:

'The reason for the Kintyre Peninsular is that my parents found our ancestors' place of residence (a ruin) on the west coast of the peninsular near A'Cleit on a visit a couple of years ago. We absolutely need to visit that place. It was called Achapharic)'. 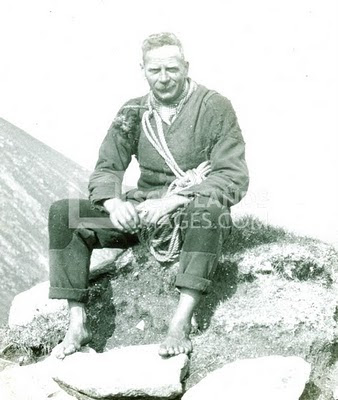 I learned that cleit is a word that survived largely on St Kilda (before it was evacuated in 1930), meaning a stone built storehouse and I came on this wonderful picture of a man on a cleit roof holding a fowling rope. The rope would be so that a youngster would have a safety rope as he raided the nests on cliff ledges below for plump young gulls. Another picture of a cleit below. 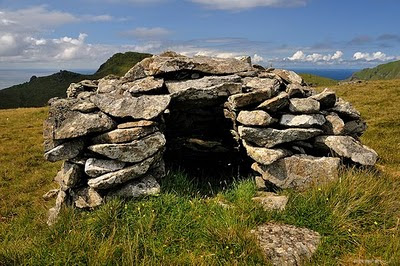 'Achapharic' took me to stories of illicit whisky distilling to make money that was needed for ever higher rents...

In 1806 a typical rent would be one or two 3-year old wedders at six shillings each, six dozen eggs and six hens valued at four shillings plus a sum of money which entitled the tenant to a seat in church. The tenants were also bound to cart loads of turf for dyking, grow oats and bear for meal, flax for coarse linen and give the services of a man and a cart free for two to six days annually.

Living off young gulls or keeping hold of your house only by distilling whisky in the hills and evading excisemen...