Celtic traditions and the Festival of Samhain

'Today' is the BBC's flagship morning news programme and the word 'Celtic' doesn't feature very often. It woke me today, introducing a piece on Hallowe'en (a Scots word for the Eve of All Saints Day) which derives from the Celtic Festival of Samhain (pronounced Sah-wen).

It was one of the four annual Celtic festivals, and probably the most significant as it launched the new year. Samhain also marked the start of the dark months and was a time to take stock of grain and cattle (how many beasts could the available food sustain through the winter?).

The Celts are first recorded in the Danube and Upper Rhone valleys; they spread to Gaul (present day France), then to Britain and Ireland in about 700 BC. The Roman and subsequent Angle/Saxon/Jute invasions of England confined the Celts to the corners of the British Isles, principally Ireland, Wales and Scotland. By accidents of geography and history, Celtic culture endured most visibly amongst the Highland Clans:

"When their enemies fall they cut off their heads and fasten them about the necks of their horses... striking up a song of victory... and fasten them by nails upon their houses."
Diodorus Circulous, writing of the Gauls circa 60 BC.

"The heads of the seven murderers were presented at the feet of the noble chief in Glengarry Castle after having been washed in this spring."
Inscription on the monument at the Well of the Seven Heads, Invergarry. The incident referred to was in 1663.

Having made preparation for sacrifice and a banquet beneath the trees, they bring thither two white bulls...Clad in a white robe the priest ascends the tree and cuts the mistletoe...He then kills the victims, praying that the god will render this gift propitious to those to whom he has granted it.
Pliny the Elder, writing circa 70 AD on the Provinces of Gaul..

In the 1670s bulls were still being sacrificed to pagan gods in the Highlands and the presbytery of Applecross, on the mainland opposite Skye, complained of 'abominable and heathenish practices'. Apparently men from Achnashellach had gathered in an ancient holy place...then killing a bull in an attempt to propitiate the gods.
Alistair Moffat, 'The Highland Clans'.

It all makes turnip lanterns seem quite innocent!
3 comments:

The Jacobite Night March to Balblair

Weather has moved along, as it always does. But last week was an 'Indian Summer': pure blue skies each morning. I was inspired to get on my bike and found myself at Balblair, west of Nairn, where the Duke of Cumberland made his camp on the eve of the Battle of Culloden. Cows now graze contendedly where nervous soldiers once celebrated His Grace's Birthday, 15 April 1746. (The house is behind those trees). 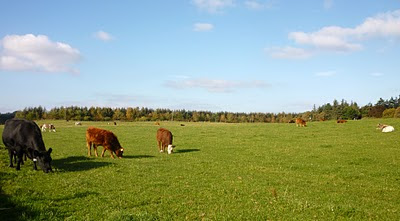 That night Prince Charles Edward's Jacobite Army embarked on an ill-fated twelve mile night march, designed to catch government forces asleep in their tents (and realistically the last throw of the dice to save the 1745 Rising).

I remember night marches. Not easy. There was a constant accordion effect: either you were bumping into the man in front or you couldn't see where he had gone! That was in a companyof 100 men; imagine an army of 4,000 - tired, cold, hungry!

The guides were local clansmen, Macintosh men, but it was thick country (roads and houses were avoided) and a dark night. It seems they alerted government cavalry well beyond the camp, since when they got to Knockanbuie, some two miles from Balblair (and already badly behind schedule) they heard the sound of a distant drum. Colder, hungrier and more tired than ever, they marched back to Culloden Moor.

Last year a re-creation of the Night March  brought home the difficulty involved. It was led by Dr Tony Pollard and completed by only 12 of an original 20. 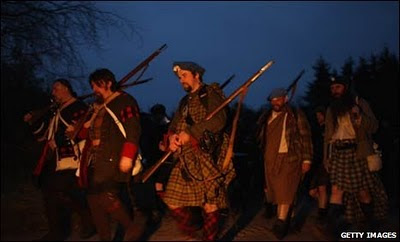 There's been no archaeological investigation at Balblair as yet, and to my knowledge there's only one artefact: a three pound cannonball found on the other side of the River Nairn, probably a test shot. And I am delighted to have held this lump of metal; it is handed round by Hugh Allison when he introduces clients on our 'Outlander Tour' to the weaponry of the period.

Next year's Outlander Tour details are now on the website.

We do know there is a very quaint island dubbed the "remotest island of Scotland".

So writes a correspondent from up near Seattle.

I suspect this is St Kilda - World Heritage Site and Europe's most important seabird colony. It qualifies as remote being 41 miles west of the (fairly remote)  islands of the Outer Hebrides. 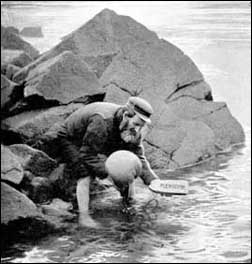 In 1697 there were 180 - 200 inhabitants on this dramatic cluster of sea stacks and their consumption of fulmars (cliff nesting seabirds) worked out at 115 per person per annum! For many years the principal form of communication with the mainland was the 'mailboat': a tin containing a letter with an inflated sheep's bladder as a float. The photo is from 1897.

It was a fascinating and extraordinary way of life. However in 1930 the final 36 St Kildans requested evacuation to the mainland.

The island is now administered by the National Trust for Scotland, Scottish Natural Heritage and the Ministry of Defence. In summer there is a resident National Trust Warden; he has just left for the winter and writes an excellent and thought-provoking blog.

Day visitors can get there with Sea Harris. 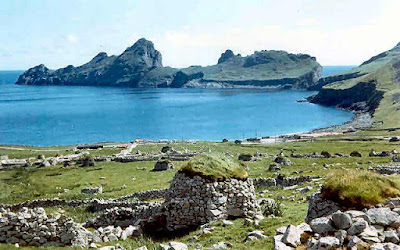 It's a fascinating place, albeit not one with tourist accommodation. If we can fix up a day trip I plan to be the volunteer guide!
1 comment: