This morning I travelled from my home in Nairn past Balbair where the government army camped prior to the Battle of Culloden, past the Loch of the Clans, past Kilravock Castle where the Duke of Cumberland reputedly had breakfast, and on to the site of that battle, 265 years ago on Drumossie Moor, where I attended the annual commemoration service.

It was perhaps appropriate that I approached from this direction since I am a Lowlander. I served in the British Army, in a regiment that stood in the Government front line that day. But one of my ancestors died fighting with the Jacobites in the 1715 Rising. So, like many Scots, my sympathies are split. I abhor Cumberland's cruelty following that battle. Equally, I condemn the arrogance that led to the whole misconceived enterprise, undertaken with no foreign assistance.

Seventy years earlier the 'Brahan Seer' had written "Oh! Drumossie, thy bleak moor shall, 'ere many generations have passed away, be stained with the best blood of the Highlands. Glad am I that I will not see the day, for it will be a fearful period." And so it was. An awful slaughter, the beginning of the end of the clan system. 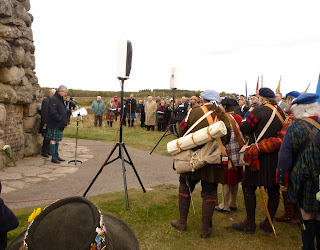 As a tour guide, I am often at the battlefield. It's a familiar routine, explaining the battle to visitors. But I have never heard a Gaelic prayer, never heard a Piobaireachd, (the great pipe lament), spreading out over this familiar field. It becomes a different place, especially when surrounded by Highlanders who have been there numerous times before, and will come again, to pay respect. 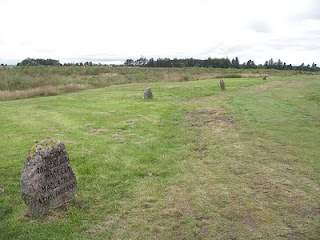 Surrounded by descendants of those who died, I am even more appalled that for 76 years there were no markers at the mass graves of  a thousand or more members of the Jacobite Army who fell that day. It was only in 1822 that Duncan Forbes of Culloden erected the present stones; the great grandchildren of the Inverness women who dug those graves told him which mound was which. It was only some 30 years ago that the 1835 road which bisected the graves was diverted to a discreet distance.

The swallows are recently arrived in Highland farmyards, baby rabbits scuttle on field fringes, skylarks sing over rough pasture and black-faced sheep that have been overwintered on the low ground are heading back to the hills. Just as it was in 1746.

And just as in 1746 Highlanders are dying for a cause that they cannot fully understand, not in the sleet of Drumossie Moor but in the dust of Afghanistan. As Allan Campbell, President of the Gaelic Society of Inverness, commented this morning, 'It is extraordinary that we never learn the folly of war'.