Amongst his many accomplishments Jamie Fraser, hero of Diana Gabaldon's 'Outlander' series, was highly skilled with Highland weaponry. Last night those on our fourth Outlander Tour enjoyed trying the weapons for themselves under instruction from Hugh Allison, author and mine of information on the Battle of Culloden. 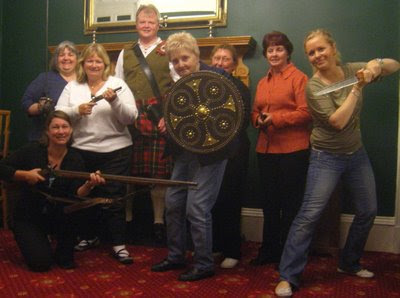 I always enjoy leading these Outlander tours. The weather has been a bit grey, but a happy group has interrogated salmon fishermen, tapped feet to Highland folk music, seen where the Brahan Seer's prophesies came true and sampled local malt whisky and elderflower wine. (This in additon to the headline activities noted on the website!). Tomorrow, it seems, the weather will be better and we head by Loch Ness to Glenshiel, the brochs at Glenelg and the Isle of Skye.
No comments:

The Great North of Scotland Railway

Yesterday I was tempted out to walk a stretch of the 'Speyside Way', a long distance footpath, and found myself on part of the old Great North of Scotland Railway line between Grantown-on-Spey and Nethy Bridge. Nethy Bridge Station, terminus for this line from 1863 to 1866, has been a bunk house since the line closed in the 1960s. At one stage, though, there were two Nethy Bridge stations. Potentially a little confusing. The other, built by the rival Highland Railway on the other side of the Spey is still in use and now called Broomhill. As we walked we saw the steam train of the Strathspey Railway pulling in, turning round and heading back to Aviemore. 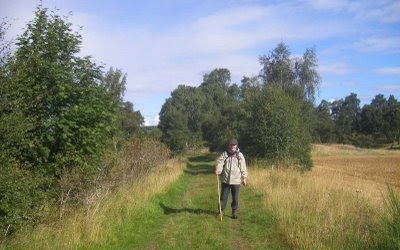 The two lines shadowed each other on either side of the Spey for about six miles. Competition between the rival companies was clearly intense, yet quality in these massive works of engineering didn't seem to suffer. One hundred and fifty years on and the line is flat as ever; the bridges, untended for fifty years, and now shrouded by trees, stand as a testament to Victorian building standards. 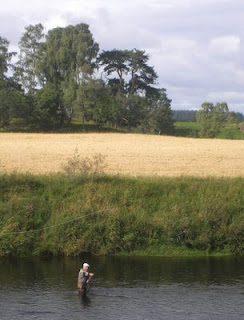 We watched as anglers enjoyed some of the best salmon fishing in Scotland. The Spey, 100 miles long, is one of the 'big four', yielding 10,000 salmon annually. This lovely river which of course gives its name to speycasting, also has happy associations with drinking (Speyside Malts) and dancing (The Strathspey).

And just by Nethy Bridge we passed the very fine but very ruined Castle Roy, a thirteenth century courtyard castle of the Comyns. A good day out.