The Clans in Paris

No, you're right. Edinburgh is indeed the setting for the The Gathering of the Clans in 2009, but last week I was exploring those places in Paris and its environs where Scottish history was played out, guiding six American ladies, previous clients of ours in Scotland.

I have written that the 'Auld Alliance' was a rather one way affair, with the Scots giving the French help that was rarely reciprocated. But for for selected Scots, French kings were exceptionally hospitable. In 1418, suspicious of his countrymen, the future King Charles VII of France formed a personal bodyguard, 'La Garde Écossaise', from the 6000 Scots fighting for him at the time. The guard gave invaluable service, was well rewarded and was finally disbanded in 1830. 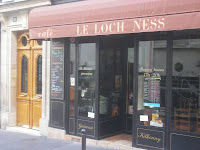 Pausing only briefly at 'Le Loch Ness' (!), we walked across the Seine to the Rue St Antoine, scene of a low point in the history of La Garde Écossaise: in 1559 its Captain, Gabriel de Montgomery, riding in a tournament there, accidentally delivered a fatal blow in the eye to King Henri II (incidentally brother-in-law to Mary Queen of Scots). The unfortunate Scot was later executed.

Beyond lies the wonderful Place des Vosges, the heart of fashionable Paris in the 17th century. We visited No. 6, not 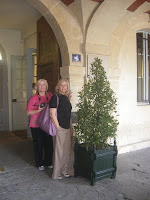 because it is the MuséeVictor Hugo but because this was the home of Marie-Louise de Rohan, Prince Charles Edward's mistress in the two years following the 1745 Rising. Nothing of that period survives except the official address: Hôtel de Rohan-Guéménée. To the right is the front door, one that Prince Charles Edward rarely took, since Louise was his first cousin and her husband one of his best friends. His visits, well documented by the Paris police, were via the nearby alleyway. 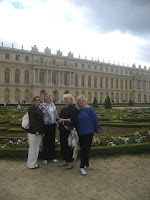 Next day we visited Versailles: breathtakingly extravagant and so strikingly different to courtly life in Scotland at the time (even taking on board Charles McKean's excellent book on The Scottish Chateau). It was also odd to be there with coach loads of Italians and scores of french school children when Prince Charles Edward who so longed for and so needed Louis XV's help with his forthcoming attempt to win the throne, was never allowed inside the place!

Time did not however allow us to go to St Germain-en-Laye, birthplace of Louis XIV, home to the exiled Jacobite Court from 1689 and base for thousands of impoverished, rootless, exiled Jacobites for the next two generations. Our King James VII is entombed in the church there. Next time.

Finally, herewith a shot of the Tuileries Gardens where old George Keith the last Earl Marischal of Scotland met secretly with Prince Charles Edward in 1752. George was by then Prussian ambassador to Paris . Scotland was by then part of the United Kingdom. This was probably, then, the last play in 400 years of Scottish political intrigue and involvement on French soil.

I am returning to Paris in the autumn to revisit these places and more. I would be delighted if you could join me.

The National Trust for Scotland is a conservative sort of organisation, not normally given to rash claims. And yet at the new Culloden Battlefield Visitor Centre there is a prominent announcement that this battle changed World History! I have visited several times and enjoy the new centre very much , but find no evidence that the battle 'changed history'! Even if Prince Charles Edward had by some extraordinary stroke of good generalship won on 16 July 1746, would he really have gone on with his army 6,000, valiant, tough, but mostly untrained Highlanders, to overcome the British Army of 62,000? Would Louis XV,who did not support the Prince when he embarked from France, nor at the propitious moment following the victory at Prestonpans, really have committed the French troops required to turn the tide? I think not, and anyway we are a long way from the Battle of Culloden changing European or World History. Surely it merely prolonged the status quo!

It's an excellent exhibition nevertheless, giving the lie to any idea that this was a Scots v. English affair, and well worth a visit.

Scottish Clans and Castles on the Move 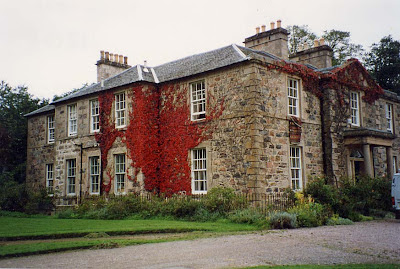 Today we completed our move to Geddes House - a classic Georgian houses in the Scottish Highlands. We are in the cellars but we still love it! We have more room, and are surrounded by Geddes Free Range chickens and pigs!
4 comments: