Scotland says 'No'. But now that you're listening...

So what should those outside these shores make of our Independence Referendum?

In short, the 'No' vote won but we are now in a much better position  - with more devolution on the way - than we were a month ago.

Much passion has been generated and it has sadly left some bitter divisions. In my personal view, this was a wasted opportunity: we were asked to vote on a general principle (which would be binding) without any knowledge (or rather with two totally conflicting opinions) as to what the balance sheet of an independent Scotland would look like. A 'Yes' vote would have been an enormous leap of faith.

The vast majority in the UK is very relieved. It did at one stage seem quite possible that the votes of two million people in Scotland could break up the 300 year old United Kingdom, (pop. 64 million). Any UK government will think carefully about a future referendum. 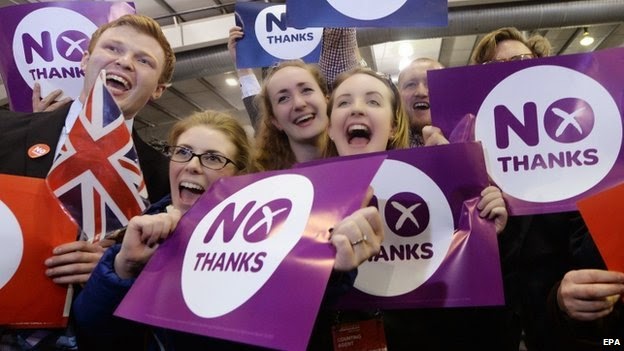 The good news is that Scotland has put down a marker. We want more devolution and we want it soon.

This genie will not be going back into its box. Many people are distraught. They feel betrayed by the majority. In their hearts they cannot accept this decision. Expectations have been raised. 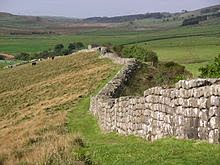 Well, its mostly the fault of the Romans. For three hundred years the Celtic tribes in the north were walled off from their southern neighbours who began to favour baths, wine and a trip to the amphitheatre over the traditional Celtic entertainments of warfare, feasting and song. And because these southerners became so soft they were easy meat for the Angles,Saxons and Danes who imported a different language and a different culture. Two kingdoms were born.

Joining them together was a success.We defeated Napoleon, built the Empire, suffered together in two World Wars, built post-war prosperity and the welfare state. But now we are both part of Europe and subject to its laws ('independence' is a relative, not an absolute, concept nowadays). Scotland's coal, steel and shipbuilding is now worked out. Now, more than ever, the centre of gravity is in London. There isn't really a joint project any more. We feel different.

It hasn't helped, over the years, that the English regularly beat us on the battlefield (as well as on the rugby pitch). It hasn't helped that English Victorians who bought Scottish castles and estates, tended to treat the locals as serfs. It hasn't helped that successive Prime Ministers - Douglas Home, Heath and Callaghan - have promised more devolution than they have delivered. But mostly it's because we feel different.

Unscrambling the constitution,  - which is now what is needed - will be very tricky. I'm not going into that now. But, despite the infighting, we are a lot better off now than we were a month ago. 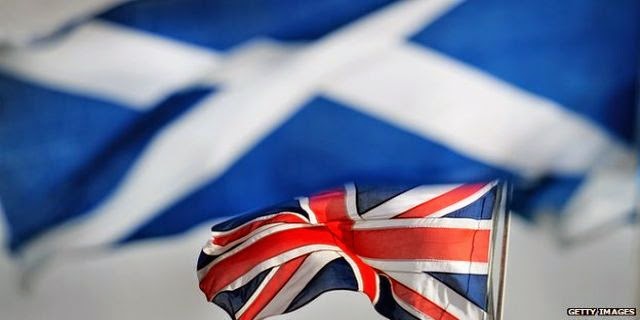