The Hill Road to Roberton

The hill road to Roberton's a steep road to climb,
But where your foot has crushed it you can smell the scented thyme,
And if your heart's a Border heart, look down to Harden Glen,
And hear the blue hills ringing with the restless hoofs again.

When I moved back to the Borders last year, I was looking forward to living near lovely Tweedside Abbotsford, home of Sir Walter Scott, which reopens to the public on 4 July. But I had forgotten about Will H. Ogilvie who wrote that great poem, The Raiders (too long to quote here but follow the link - it's a wonderful evocation of the romance of the Borders).

I was recently in Galashiels on a lovely spring afternoon and decided to return to Hawick via 'The Hill Road to Roberton' where Will's ashes were scattered, and pay my respects to his cairn (below).

It's a beautiful, undulating, moorland road which I will make a point of revisiting in August when the heather is out. But I'd forgotten that as I wound down into the valley of the River Teviot I would pass by 17th century Harden Tower, once home to Auld Wat of Harden (depicted below), one of the most notable of the Border Reivers. 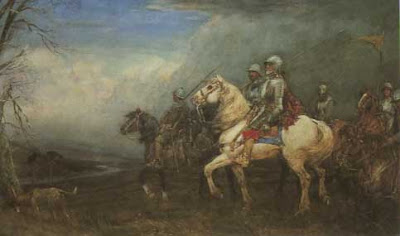 Which brings us back to his descendant, Sir Walter Scott, who wrote so effectively about 'Auld Wat' in the 'Lay of the Last Minstrel'.

Do make a point of visiting Abbotsford - a lovely and fascinating house with a well designed visitor centre.