The best known Jacobite rising was of course the 1745 which ended with the disastrous Battle of Culloden. But it was the 1715 that had the most chance of success. Queen Anne died in August 1714 and although there were 56 better claimants, a non English speaking (but Protestant) German princeling was brought over to be the next king. Many people were unhappy; there were impromptu riots in English cities and armed rebellions in northern England and Scotland. The rightful king, Bonnie Prince Charlie's father James, took an extraordinarily long time to lend his presence to those who wished to secure the crown for him. Had he come earlier, things might have been different! 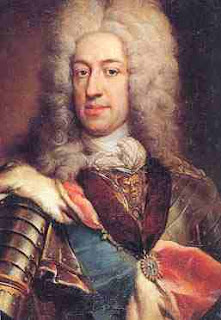 James arrived (in disguise) at Peterhead on 23 December 1716 accompanied by just six gentlemen companions. No preparations had been made but he was offered the Earl Marischal's house at Fetteresso near Stonehaven. The Earl himself was in Perth with the Jacobite army, only arriving at Fetteresso on the 27th. The weather was foul and the king fell ill with the ague. He thus spent Christmas, still incognito, ill in bed in a strange, cold, house without a host or hostess (and a price of £100,000 on his head!). I doubt there were many presents.

My broken leg and I are being looked after by the excellent staff at Raigmore hospital, Inverness, this Christmas. It will be a whole lot more pleasant than that of the would-be James VIII of Scotland on his first visit to this country in 1716!

I wish you all a Christmas fit for a king!

PS. For more on Jacobites and Christmas, have a look at my last Christmas post.
No comments: