The Book of Kells

I am in Dublin, courtesy of Lynchpin Tours an Irish tour operator with whom we have worked for some years, providing an integrated experience for those wishing to visit our two countries. We flew from Inverness to Belfast and were met by David of Lynchpin who whisked us down to Dublin under pure blue skies. The same skies had allowed a great aerial view of the west coast of Scotland, the islands and the Antrim coast. Now 'divided' by sea, this was all at one time the Lordship of the Isles, controlled by the great Clan Donald and connected by these busy sea lanes. 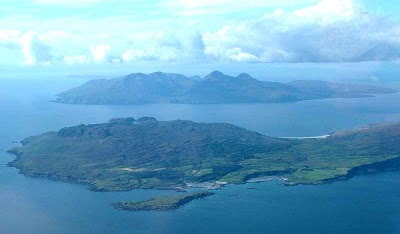 We went straight to Trinity College Dublin and were met by Anne Marie Diffley, curator of the university library which now houses the Book of Kells, which in short contains the four gospels written on calf vellum by monks at the monastery of Iona in the 8th century. So far so remarkable that such a document should have survived, given time and the constant raiding of Iona by Vikings in the 8th and 9th centuries. (The golden case that housed the Book of Kells was actually stolen but the book discarded). What is truly remarkable is that on this tiny remote island, there were artists of such extraordinary genius since the book is illustrated extravagantly and exquisitely with images, symbols and Celtic knotwork created in pigments that had found their way from present day Afghanistan and Egypt to Iona. 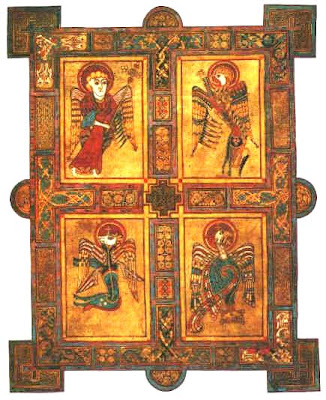 No photograph can do justice to this incredible work of art; you have to see it.

When I asked when the book would return home to Scotland I was met with a wry Irish smile.
No comments:

In London for New Year, I came upon a Place of Execution: Smithfield, a little north of St Paul's Cathedral. Sir William Wallace is the most famous victim; well, he is the only one for whom there is a memorial plaque. On the pavement below lay a faded sprig of heather and small bouquets, tied with tartan ribbon. The romance of Wallace, guerilla leader, born four hundred miles away in another country, executed 1305, is enduring. 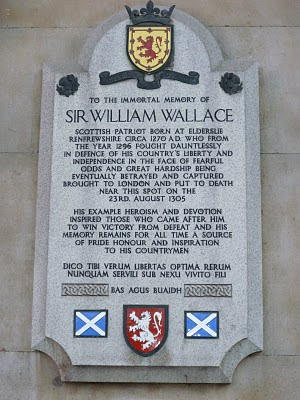 Smithfield, sandwiched between St Bartholomew's Hospital (founded 1123) and Smithfield meatmarket (slightly older) has seen numerous executions. More than 200 Protestant martyrs were burnt at the stake in the reign of Queen Mary, swindlers and coin forgers were boiled in oil there and Sir John Oldcastle, the original Falstaff was roasted alive in chains. But the only plaque is that to Sir William Wallace. 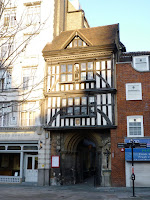 at. It has been in continuous use as a place of worship since 1143, is adjacent to the oldest inhabited house in London and has featured in such films as 'Shakespeare in Love' and 'Four Weddings and a Funeral'.

There is an odd connection here. Wallace was executed on the Eve of St Bartholomew's Day 1305. The Bartholomew Fair at Smithfield seems to have been a great party. Was Wallace's Execution the day preceding perhaps a curtain raiser to the celebrations? This might have appealed to Edward Longshanks.

PS. In Scotland we have a wonderful monument to Sir William near the site of his most famous victory; it's a pity that other significant places in his life are not well cared for.
2 comments: