I have previously referred to the influence of Robert Burns on Abraham Lincoln. Now a leading American academic, Dr Ferenc Morton Szasz, has published his findings that Lincoln could recite Burns' work by heart and that the Scot's passion for social justice fuelled the US leader's crusade to emancipate African-Americans. More detail in today's Scotland on Sunday.

The publication is timely as we approach 2009 and the 250th anniversary of the poet's birth, celebrated here in Scotland with the Year of Homecoming. 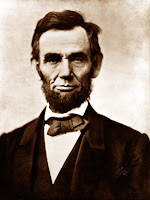 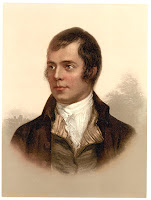 I visited the Wallace Monument last week. This is not what I saw - but it might have been! 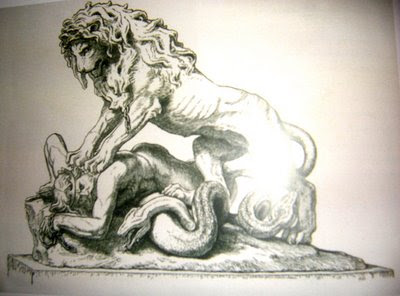 The idea of a monument to commemorate William Wallace, the Great Patriot, first discussed in 1818, found form in 1856. But the proposed massive sculpture of a Scottish lion in the act of killing the English typhon designed by Sir Joseph Noel Paton was considered ‘too provocative’!

So a competition was arranged. It was won by the Glasgow-based architect J T Rochead, with the present tower, designed to recall the tower houses that had sprung up all over Scotland in the 15th and 16th centuries. Like them, the Wallace Monument is of rough hewn stone and is light on windows; it is topped with a crown spire, a peculiarly Scottish motif.

Nowadays we treat the monument on Abbey Craig by Stirling as part of the landscape. But in Victorian times it was the centre of some controversy. Some thought it a 'fantastic nightmare of a memorial', others detected the vital connection between a rugged castle-like monumentalism and an idea of 'Scottishness'. I would agree with neither but it provides a good oversight of both Wallace and Stirlingshire - well worth a visit if you can cope with the 246 turnpike steps.