I was in the Borders on a glorious autumn weekend (just before the floods!). As we passed Fatlips Tower on Minto Crags, I gave the traditional explanation of the odd name: 'The Turnbulls had fat lips'. But apparently there is a more interesting theory: one of the pleasures of a visit to Fatlips used to be that "every gentleman, by indefeasible privilege, kisses one of the ladies on entering."

The Turnbulls were a small Border clan; but travelling south we passed Caerlanrig, a place of pilgrimage for the Armstrongs, a big beast in the Border reiving jungle. In the 1500s Border families were raiding into England, embarrassing the Kings of Scots and in November 1530 Johnnie Armstrong of Gilnocky, one of the most successful reivers of his day rode out to Caerlanrig. He was invited to meet his king. Dressed in his finery, and with promise of safe passage, he rode with thirty-six followers to meet the youthful James V of Scotland who was hunting in the area.

Well, in brief, Johnnie and his men were taken and hanged without trial - pour encourager les autres. Johnnie's grave is there. His exploits are commmemorated in The Ballad of Johnnie Armstrong.

We went on to Johnnie's home at Gilnocky Tower (below), now a Clan Armstrong museum. (And yes, this photo was taken on 13 November 2009!). 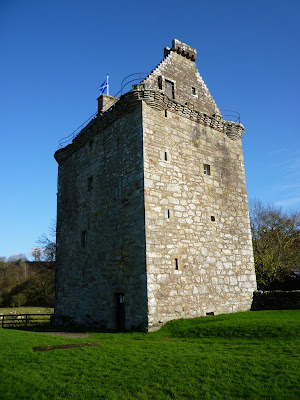 As we headed further south, west and into England, we passed Carlisle, whose castle is made famous in another great story of the Borderlands. Kinmont Willie, also an Armstrong, was dramatically sprung from the castle by a bold Border raiding party led by Sir Walter Scott of Buccleuch.

But that... is another ballad.