It had been a great stay on Mull - Duart Castle (above), sea eagles, otters, and an afternoon of hot sun! Leaving the Fishnish ferry at Lochaline I almost drove off the road at the sight of a beautifully restored tower house. Correctly termed Kinlochaline, the locals call it 'Butter Castle'.

This was a MacInnes castle. It was said that one of the clan women Dubh-Chal (Lady of the Black Veil) paid the architect an amount of butter equal in size to the castle, hence the name, Caisteal an Ime, or Castle of Butter. A carving, thought to be Dubh-Chal, is above the fireplace. 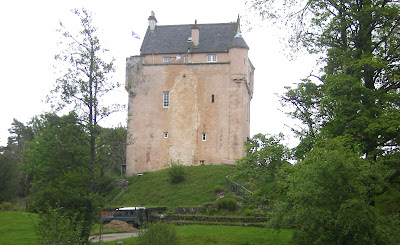 In the 14th century, Chief MacInnes of Ardgour was foster father and counsellor to John, Lord of the Isles. MacInnes had advised John to divorce Amy MacRuari and marry Margaret Stewart, daughter of the future King Robert II of Scotland. Then Amy got her revenge by relating that MacInnes had complained, when he stayed at John's house, that ‘his quarters did not smell well because they were used as a dog's kennel’. 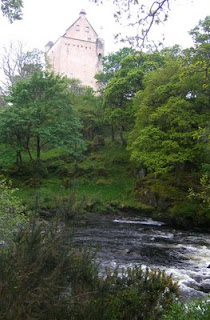 John was duly enraged and ordered Donald MacLean of Duart to kill MacInnes. This he did, also killing MacInnes’ five sons and so gaining possession of Ardgour.

The Clan never recovered and has not had a chief since. In 1997, Sir Lachlan MacLean of Duart and Morvern offered an apology to Clan MacInnes President William MacInnis.

The castle, ruinous from 1644 until the 20th century, is now a family home. 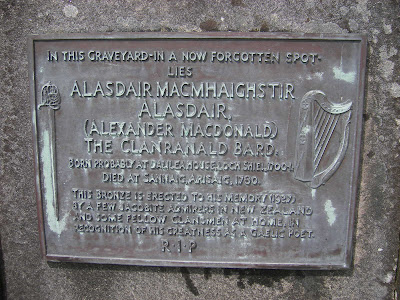 Alasdair mac Mhaighstir Alasdair's name also points up a problem. 'Mac' is the Gaelic for 'son of ', thus Alasdair's father was Maighstir Alasdair (in English, Rev. Alexander MacDonald). Alasdair was 100% MacDonald (first cousin to Flora MacDonald), but there was no convention of surnames in 18th century Arisaig. Had Alasdair given up hiding from the redcoats and instead taken a boat to North Carolina, the clerk writing out the passenger list would probably have abbreviated the name to 'Alasdair mac Mhaighstir' or even Alasdair MacMaster. Quite a challenge therefore for any descendants tracing their roots!
No comments: