Yesterday I spent a happy late afternoon in the Cawdor Castle gardens, trying out a new camera.

For many the word 'Cawdor' brings just a faint echo of 'Thane of Cawdor' in Shakespeare's 'Macbeth'. In fact Macbeth became king of Scotland in 1040; and so long before the castle was built (circa. 1400) or even the first Thane appointed (1295). 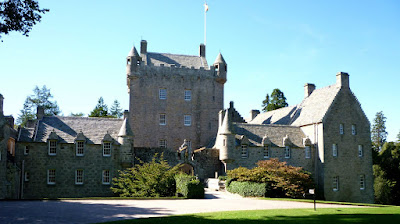 Cawdor has a golden thread of authenticity: built by the third Thane, it is now the winter home of the 25th Thane's widow. It is also a stylish survivor: despite the Battle of Culloden ten miles away and the Battle of Auldearn six miles away the castle is undamaged by battle or ill-advised additions and has grown in sympathy with the original architecture. Today the castle shows how history, art, fine gardens, gracious 21st century living and a successful visitor attraction may be happily combined. 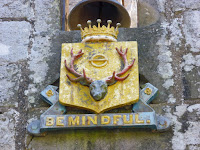 And the golden thread is there for those who look. The thorn tree, over which the castle was built in 15th century, (whereby hangs a tale) is still there; radio carbon dating confirms it. The joining of the families of Cawdor and Campbell in the early 16th century is in the crest above the drawbridge: Campbell Motto, Cawdor crest. That's another tale - one of kidnap, mutilation, murder and a surprisingly happy marriage! 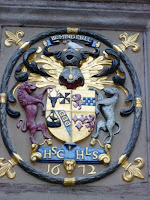 And above the main entrance is the coat of arms of Sir Hugh, 15th Thane. He married Henrietta Stewart whose arms, including the familiar red lion rampant, are on the right. Their 17th century marriage bed, recently reconditioned, is on display in the castle.

As I wandered round the gardens, I started to notice dates. An aromatic herb native to North America, collected in 1744. Lavender beds laid out by the Lady Cawdor of that time in 1850. The holly maze, planted in 1981. And one part of the Rose Garden is closed as it is currently being reconstructed. And so it continues. An age away from Lady MacBeth and her devilish plotting. 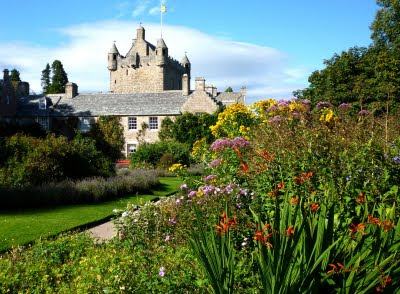