The enduring riddle of the Pictish symbol stones


They are the hieroglyphs of Scotland. But we have not yet found a Caledonian Rosetta Stone to interpret them.

There are thought to be about three dozen different ‘Pictish symbols’ carved in different combinations on a few hundred extant stones around Scotland – usually found in the traditional Pictish heartland of central and north-eastern Scotland. Some are combined with Christian symbology on magnificent stone crosses (or slabs with crosses engraved on them).

For a while after their conversion, the Picts used Christian images together with the old symbols. Sometimes it seems as if the crosses were engraved on older pagan stones. Many of them also include hunting scenes or other depictions of dark age aristocratic and military activity.

What they mean nobody knows for sure, even though numerous clans such as the MacGregors and MacNaghtens claim Pictish ancestry.

This magnificent specimen, which I visited last week, stands at Wester Fowlis in Strathearn, not far from the pretty spa town of Crieff. On one side is an extraordinary engraved cross, notable for its protruding arms. On the other, a series of hunting scenes with the tell-tale Pictish symbols of a ‘mirror’ and a ‘double disc’. 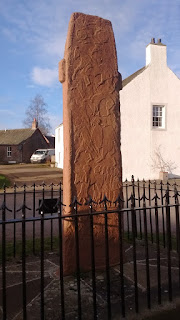 The one in the photo is actually a replica, with the real thing kept sheltered in the nearby church. It’s open and you can in and see it – a great example of the many historical sites and works of art that can be experiences for free in Scotland.

What do the symbols signify?

Some have speculated that, in different combinations, they depict various clans, territories, individual nobles or noblewoman. Although they are not usually located on burial sites, they may have religious connotations.

I feel sure that one day someone will either crack it logically or discover something that unlocks the code.

Maybe language has something to do with it. When I was a boy, it was thought that Pictish was a language largely separate from the two Celtic languages of northern Britain – Gaelic and Brittonic (early Welsh). Most scholars now think that it was similar to Brittonic.

Either way it was apparently replaced by Gaelic in the period after the union of the Picts and Scots in the early middle ages. As with the symbols, there is little hard evidence as to its nature.

But the idea that Pictish was eradicated by Gaelic has always seemed a little odd to me. The supposition is that the ruling elite became Gaelic speaking and, quite rapidly, imposed its language on everyone else. This didn’t really happen in other similar situations in the British Isles or elsewhere in Europe unless there was an accompanying movement of peoples.

Perhaps Pictish was really much more like Gaelic in the first place, and the clue to its symbology will come from that source.

At any rate, I have no real idea, except that it is a fascinating riddle!

Tom Miers
For a memorable holiday exploring Scotland's heritage and culture, check out the Clans and Castles website

Mary Queen of Scots. Did you know?

The film will be with us soon and we'll see the dramatic (but fictional) meeting between Mary and her cousin Elizabeth. But here are a few facts about our tragic royal heroine.

2. Mary was married three times. The marriage to Francis II of France lasted 26 months (Francis died). The second to Henry Lord Darnley lasted 18 months (Darnley was murdered), the last to James Hepburn, Earl of Bothwell technically lasted some years but after 30 days Mary was imprisoned and Bothwell fled.

3. When at Jedburgh, Mary nearly died of what was probably a gastric ulcer. Her French physician 'cured' her with tight bandaging of the arms and legs, and by inducing vomiting with an enema and large quantities of wine.

4 Mary went to France aged six as Marie Stewart but her French governess explained that 'ew' is pronounced 'ev' (it is in French!) and if you want 'Stooart' it must be spelled 'Stuart'. So she returned as Marie Stuart.

5. The day after Darnley's murder Mary attended the wedding of her bedchamber woman, Margaret Carwood. She is said to have played golf 'a few days' after the murder. She certainly married the man widely thought to have been the murderer (Bothwell) just three months and six days after the murder.

6. She was held in seven different castles in England. Nothing remains of the grand royal residence of Fotheringhay where she was executed on 8 February 1587.

7. Her descendants have been on the thrones of England and Scotland ever since.

Follow the Mary Queen of Scots trail  with Clans and Castles. 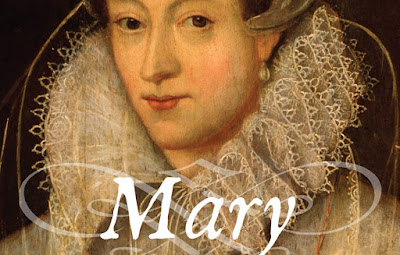