What is a clan? When is a clan not a clan?

Clans (Gaelic clann, children) provided the social fabric of the Scottish Highlands from medieval times until 1746. Central to this system, the roots of which lie in the Celtic tribes that confronted Julius Caesar, was that the clan chief held land, duthcas, on behalf of his people. He was responsible for their security, wellbeing and the administration of justice. The clansmen (anyone living on the duthcas) in turn owed unswerving loyalty to the chief. Clansmen felt no allegiance to the king of Scots or his lowland adherents, sasannach.

The last Gaelic speaking king of Scotland died in 1513. Thereafter Gaelic became marginalised and the Highland clans developed separately from Lowland Scotland which housed the ruling elite. Apart from a different social structure and a different language, the Highland clans had a different dress (kilt), different music (bagpipes) and a different morality (the clan chief had an absolute duty to ensure the clan had food; if that meant stealing cattle then so be it). Clansmen raided regularly into Lowland Scotland and the Jacobite uprisings of the 18th century all had their roots in the Highlands. As with any minority aggressively asserting its own culture and threatening the status quo, the clans were resented, feared, despised. It was only in the 19th century under the influence of Queen Victoria's 'Balmorality' that Highland culture became not just accepted but highly fashionable.

In my recent post on the last Cunningham Chief I referred to the 'Cunningham Family'. But the tombstone states 'Chief of Clan Cunningham'. So which is it? 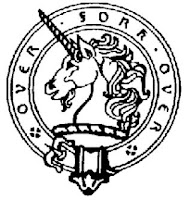 When the Cunninghams arrived in Ayrshire south of Glasgow in the 12th century (along with the Bruces, the Grahams and many others), they spoke English and it's unlikely any land-owning Cunningham ever spoke Gaelic, understood about duthcas, or felt the least affinity with Gaelic culture. Their language became the rich Ayrshire Scots of Robert Burns. And the last Earl of Glencairn, who took holy orders in the Church of England, was certainly the most unlikely clan chief.

So runs the argument for the Cunninghams being a Lowland Family rather than a Highland Clan.

Sadly, since the death of the Earl of Glencairn in 1796, there has been no chief to provide guidance. There is also no Cunningham Association in the UK. There are two quarrelling Cunningham Associations in the USA; about the only thing that they agree on is that we are a clan not a family. Our American cousins actually take an active interest in preserving the Cunningham heritage; so who are we, who do nothing about it, to tell them what is right or wrong?

So 'Long Live Clan Cunningham!' and thank you Larry Augsbury, High Commissioner of the Clan Cunningham Society of America, for that fine memorial to our last clan chief!
5 comments: 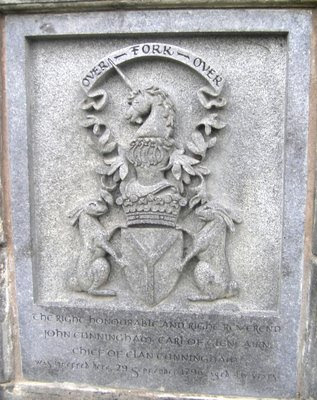 There are also companies, such as my own Scottish Clans and Castles, which arrange personalised journeys to clan lands. I have felt quite emotional on several occasions when guiding visitors to the places where their ancestors lived, fought, feasted, died. I hate to sound like a politician, but it really was a privilege - and a prod that we Scots should relish what we have here on our doorstep.
2 comments: 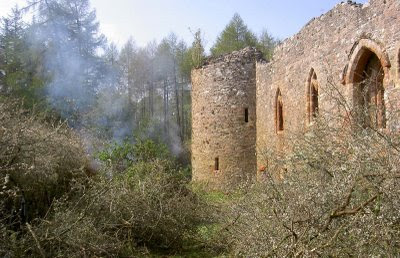 Rait Castle, a mile south of Nairn, is the best surviving example of a Scottish hall castle and yet in the last twenty years or more nothing has been done to protect this unique 800 year old structure. I took a walk up there yesterday. The owners have done a certain amount of shrub clearance, (I am told that more is planned) and with the foliage now at its thinnest you can get an idea of how the buildings within the protective barmkin wall might have looked when the castle was abandoned in the 15th century. But it is damage to the building itself that really concerns me: trees grow out of the wallheads, their roots boring into the handiwork of those who probably also built Barevan Kirk and some of Kinloss Abbey. 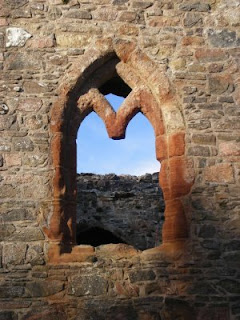 Some ten years ago I put up a site, provocatively titled Save Rait Castle. It is now a bit out of date but I hope you can see there why this castle is both historically important and architecturally impressive. There is also a good ghost story.

Why has nothing been done? It's a long story, centring round a protracted dispute over ownership which allows bureaucracy to look the other way pleading, "We can't do anything until we know the legal owner". Personally I think the law must be changed so that landowners are obliged to take responsibility for historically important buildings on their land and the state is obliged to intervene to get things done, imposing harsh penalties for non-cooperation. 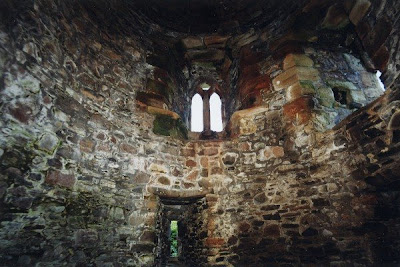 Finally, and a little whimsically, Gervaise de Rait was Edward I of England's man in Nairnshire. When Edward was strutting his stuff as the self-appointed 'Overlord of Scotland' in 1303, he spent ten days at Lochindorb Castle. During this period his army famously took Urquhart Castle, but also Nairn Castle. Rait lies on the road from Lochindorb to Nairn and it would be strange indeed if he didn't dine, or sleep, or both with his adherent at Rait!
3 comments: