I am enjoying a few days in Aquitaine, south east of Bordeaux. It's a stunning, undulating, landscape of vines and sunflowers and fortified hilltops; these are mostly Bastide towns - 'new towns' of the 13th century, each with a market square surrounded by a grid of small streets and alleyways. Extraordinarily, many were built by Edward I of England (who executed William Wallace). Edward held Aquitaine thanks to his ancestor, Eleanor of Aquitaine. That so many of these wonderful buildings have survived intact into this century is remarkable. 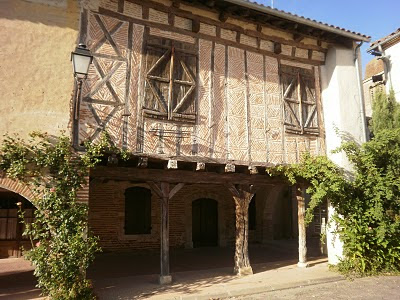 My holiday reading is a book called 'At the Loch of the Green Corrie' by Andrew Greig. I thoroughly recommend it. Woven into a tale of a fishing expedition is philosophy, geology, autobiography and a lot about the culture of North West Scotland. It's packed with quotable quotes and today's is this: 'Sometimes the more you know, the less you see. What you encounter is the knowledge and not the thing itself'. This immediately recalled the time I saw a sea eagle plunge down for a fish off the Isle of Skye: I was so keen to take a good photo that I missed the drama. And sadly I'm not alone in this: many tourists are too keen to snap and move on, not actually benefitting from encountering 'the thing itself'.

So now I'll stop trying to work out the relationship between Edward I and Eleanor of Aquitaine and just relish those 700 year old timber-framed buildings! And a little of the produce of those ancient vineyards.
3 comments: