Two Mackintoshes from Pennsylvania were here last weekend searching for their roots. The Mackintoshes were traditional leaders of Clan Chattan (pronounced 'hatton') a confederacy of small clans, based south of Inverness.

Whilst doing a little research for the trip I came upon the signing of the 'Clan Chattan Band of Union' at Termit in 1609, and the stone laid to commemorate this event in 2009. 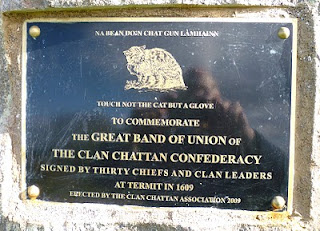 Termit? Try it in in Google and it suggests you mean 'termite'. Look on the map and it isn't there!
Well, now I can reveal to anyone who is interested that Termit (no buildings remaining) is about five miles east of Inverness on land now known as Moraystoun. The stone is accessible at Grid 753488 and, as you can see, it is looking well in the landscape.

So why did these smaller clans feel the need to band together? The official explanation in the Clan Chattan newsletter is here. More generally, I would suggest that since James VI, King of Scots, had recently accepted the throne of England, royal control of the Highlands was increasingly arm's length. The Gordons, the Frasers, the Camerons and the MacDonalds were all big beasts in the north. The smaller clans had to come together, or risk being eaten up.

Clan Chattan led the Highland Charge at Culloden in 1746.
1 comment: