When is a castle not a castle?

A castle is advertised for sale. So I took a look.

Cavers Castle, a tower house of the Black Douglas, was destroyed by the English in 1545, remodelled in the 1750s and much extended in 1887. It has been a ruin since 1953 when the last Palmer Douglas laird, quite remarkably, sold the contents and allowed the army to use the building for target practice. Now mature spruce trees surround and oppress the sad skeleton, swaying arrogantly in what was drive, lawn, flower bed.


I chatted to some people from a cottage nearby. "It's not really a castle", they said, "more of a mansion house". And when I looked in my favourite reference book, the entry under Cavers Castle read, 'See Cavers House'.

So which is it?
The generally accepted definition of a castle is a 'private fortified residence'. When built in the 16th century Cavers was undoubtedly a castle; but in 1887 it was rebuilt for gracious living with no thought for defence. Queen Victoria and Prince Albert did not build Balmoral as a fortified residence in 1856 but, unlike Cavers, it does have many of the architectural defensive features of a castle.


Blair Castle, seat of the Dukes of Atholl, started as a castle, was remodelled in 1740 to be a stylish country house with no turrets or castellations then in the 1860s, under the influence of Balmoral, was transformed back into a castle!

So it is a grey area... which could confuse the potential castle purchaser. Or, more unfortunately, a visitor to our shores; Castle Venlaw in Peebles, for example, is a very good hotel, but no more a castle than your house or mine!

It's difficult to imagine, as I walk by the River Teviot to ruinous Roxburgh Castle, that King David I (1124 - 1153) governed Scotland from here, that it saw royal marriages and births, and was one of the principal strongholds of Scotland, ceded to England (with Edinburgh and Stirling) after the capture of King William 'The Lion' in 1174. 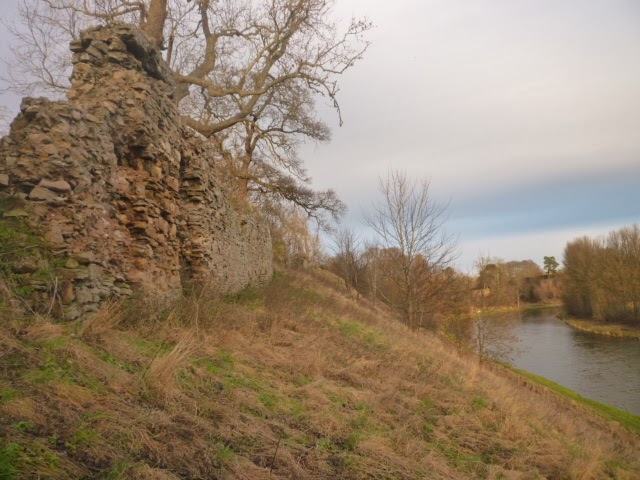 It's a wet and windy January afternoon and it's also hard to imagine an iron cage hanging from these walls, a cage containing a king's sister. She was Mary, sister to Robert the Bruce, held here by the English, 'exposed to public view' from 1306 to 1310, then removed to a convent, (presumably to stop a valuable hostage from dying of exposure). She was released after the Battle of Bannockburn (1314) in exchange for English noblemen.

Ah yes! Bannockburn. There's a happier story! Our last 'home win', 700 years ago on 23 and 24 June. And Roxburgh Castle was taken for the Scots by 'Good' Sir James Douglas earlier that same year by creeping up on it with sixty men disguised, they say, as cattle; though sadly we don't have the exact day to celebrate it. This left Stirling as the only Scottish Castle in English hands... fanfare and cue Bannockburn re-enactment later this year.

But returning to Roxburgh, this is what Andrew Spratt (and he's normally pretty good) thinks it looked like. 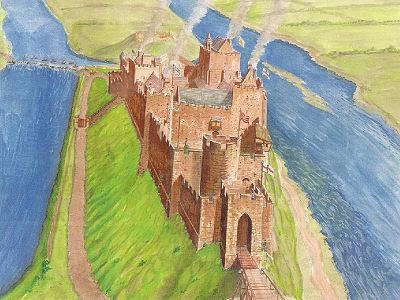 The two rivers join just below the illustration and the Teviot was partially diverted (top) to surround the castle with water (just like Caerlaverock on the Solway Firth and Old Inverlochy Castle at Fort William).

Roxburgh changed hands between Scots and English 13 times and was eventually destroyed by the Scots in 1460. But this was another bitter and uncertain time: our king, James II, had been killed standing by a canon, firing on English-held Roxburgh Castle from the grounds of Floors Castle across the Tweed.

The magnificent  building that now smiles benignly across the river is a modern structure (of 1721) but well worth a visit. And if you do go, look for the holly tree marking the spot where James II was killed by his favourite canon. And perhaps you will take time to wander up to the thought-provoking ruins of Roxburgh Castle. 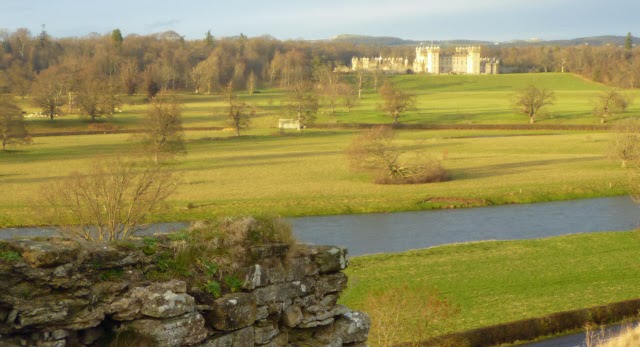