It was a familiar voice on the car radio. But until he started talking about ancestry I hadn't recognised Bruce Durie, genealogist, broadcaster and chairman of the Ancestral Tourism Steering Group on which I sit. When he moved on to the cursing bone of Katherine McNure of Glen Shira, I stopped the car to listen.

The 'bone' in question is now in the National Museum of Scotland, Edinburgh. Further illumination is given by this 'Extract from the Proceedings of the Society of Antiquaries of Scotland Vol.78 (1943-1944) pg141:

Witch’s Cursing-bone consisting of the marrow bone of a deer or sheep, stained deep brown by peat, and fixed through a diamond-shaped pice of bog oak. It was formerly the property of a reputed witch living at the head of Glen Shira, Argyll. According to the local tradition,“When the “witch” wanted to “ill will” one of her neighbours, she went out with her bone between sunset and cock-crow and made for the neighbour's croft. She did not go to the dwelling-house, however, but to the hen house and seized the hen that sat next to the rooster (his favourite), thrawed its neck, and poured its blood through the cursing bone, uttering her curses the while.

I am reminded of Isobel Gowdie, from Auldearn, just two miles from here in Nairn, who gave a full and detailed  confession of the doings of her coven at her trial in 1662. I have read the full transcript and she seems really quite proud of her doings -  even giving the magic spell by which a witch can turn herself into a hare, then back to a witch.

But soon (25 Jan) it is Burns Night and I finish with my favourite witch: 'Nannie' famous for her 'cutty sark', short skirt, in Robert Burns' epic tale, Tam o' Shanter. 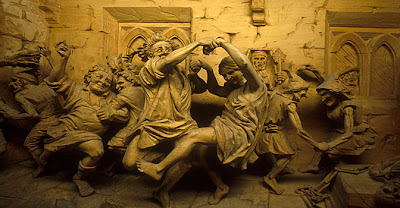 Satan is blowing the pipes, the witches are dancing, Tom is captivated, his horse Maggie terrified...


'Even Satan glowr'd, and fidg'd fu' fain
And hotch'd and blew wi' might and main
Till first ae caper, syne anither
Tam tint his reason a' thegither
And roars out, "Weel done, Cutty-sark!"
And in an instant all was dark
And scarcely had he Maggie rallied
When out the hellish legion sallied.'
The new Robert Burns Birthplace Museum opened today, 22 January 2011.
I look forward to visiting on Monday and will report back.﻿
No comments: 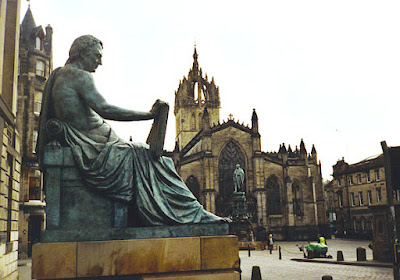