I went down to Bught Park in Inverness today to see an International... Scotland v Ireland playing the hybrid rules that combine Scotland's national game of Shinty with its Irish brother, Hurling.

I once watched a Shinty game with an American client, and remember describing it as hockey with fewer rules. He said, 'Mmmh, strikes me as more like organised violence'.  This was what we enjoyed today. 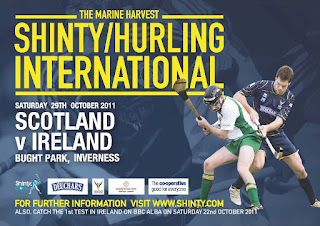 Watching the game, I was struck by the difference in the two sticks. As you can see from this advertisement, the Hurling stick has a flat surface and the Irish proved very skilled at picking up the ball, running with it tossing it up and hitting. The Shinty stick is better suited to hitting off the ground and this was where the Scottish points came from. 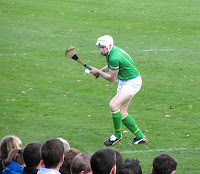 The word 'Shinty' probably comes from the Gaelic sinteag, a leap or bound, which may also be the root of the word 'shindig', a riotous party. The first reference to Shinty is actually in Kirk Session records of the City of Glasgow in 1589.

Hurling, probably Shinty's ancestor, has earlier roots: a 12th century Irish document refers to Cuchulainn, a mythological Celtic hero, who won fame by driving a ball into the snarling mouth of a guard dog.

Shinty or Camanachd is a part of Scotland's Gaelic heritage. In the bloody aftermath of the Battle of Culloden in 1746 tartan was banned, carrying weapons was banned, bagpipes were banned and there were attempts to ban both Shinty and Golf (that other Scottish game). But the subsequent Highland Clearances dispersed Highlanders and their Celtic culture all over the world; Shinty spread with them and there is now a US Camanachd Association. Golf seems to have caught on there too.

In Canada, they say, the game changed a little. In 1800 Scottish immigrants played on ice at Windsor; and ice hockey was born. 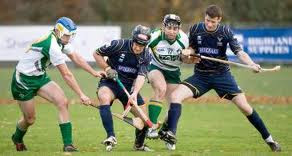 And what happened today?

Well, it was a bit like the Scottish Rugby team's performance in the recent World Cup in New Zealand: doing well at half time (11 - 5) but ultimate defeat (14 - 15). Both sides played well and there were remarkably few casualties.
1 comment: 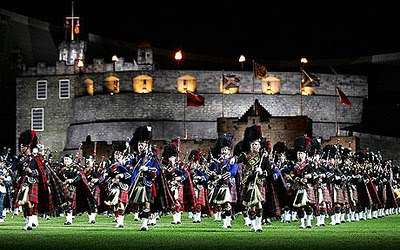