Today is St Andrew's Day. 30th November is celebrated as a national saint's day not just here in Scotland, but also in Russia, Greece and Romania. He is our saint because a monk called Rule brought one of St Andrew's bones to Scotland in the fourth century; Rule was actually shipwrecked at a place now known as St Andrews. And the holy relic, held for centuries in the cathedral there, caused St Andrews to be a great place of pilgrimage until the Reformation. Still the pilgrims come, but now they bring their golf clubs.

And now that we have a Scottish National Party Government, today has increased prominence and civil servants are enjoying a National Holiday. We are encouraged to become involved and Nairn Academy, my daughter's school, has obliged by creating a St Andrew's flag made of 1000 staff and pupils .

This year St Andrew's Day is also being used to launch the Year of Homecoming 2009 with a very neat little TV advertisement: "Caledonia" featuring pop singers, sportsmen and even Sean Connery. Worth watching.

One of the most prominent events of Homecoming 2009 is the The International Clan Gathering in Edinburgh next July, but if you are planning to be there, you should be stirring yourself as tickets (known as 'passports') are in short supply. (Only from Scottish Clans and Castles can you still get a hold of Gold Passports!).
No comments:

Clan Chiefs and their ancestral homes

There is an understandable curiosity amongst visitors to Scotland about our clan chiefs. Generalisaton is impossible, however. The chief of Clan Murray is the 11th Duke of Atholl: his seat is at Blair Castle and he commands the Atholl Highlanders, the only legal private army in Europe but actually lives in Haenertsburg, South Africa. The chief of Clan Campbell is the 13th Duke of Argyll: his seat is Inveraray Castle built by his ancestor in 1746. In 2005 he captained the Chivas Regal Scotland team to win the World Elephant Polo Championships for the second year running.

I could go on. They are a colourful bunch. 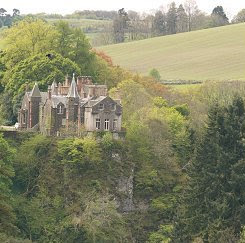 A year or two ago I took a German journalist to meet Lachie Rattray, chief of Clan Rattray. We met in the beautiful and dramatic Craighall Castle (above) which has been in the family since 1533. He shattered a few of her illusions however when he explained that to fund the castle upkeep, he runs an architectural salvage and bath cleaning business and his elegant wife Nicky owns a bunkhouse in Stirling and offers Bed and Breakfast in the castle (enjoyed by several of our clients).

Alas it seems that the struggle has been too great and the lovely Craighall Castle is up for sale.
Much though I like them, I do hope there are no worthwhile offers.

A Jacket with Pedigree (and Airmiles)

The owners of Campbell & Co, ladies' and gentlemen's tailors, hosiers and outfitters of many years standing, will often recognise their clients as they come through its doors in Beauly near Inverness.

And so it was one sunny day in September. Except that it was the jacket rather than the face that was familiar. "
I haven't seen that tweed for a while," remarked Mr Campbell.
"No," agreed his sister. "It used to be a Hunters of Brora favourite."

The jacket's wearer, Tim Krech from Carmel, California, here on a Clans and Castles holiday is rather intrigued by this. "Well, my grandfather married an English lady. He loved Scotland and bought a lot of his clothes here."

"Would you mind, Sir, if I had a very quick look at the inside of your pocket?" Tim's smile broadens. "As I suspected," continues Mr Campbell, "I measured your grandfather for this jacket myself. In fact if you give me a moment I may be able to turn up the ledger." 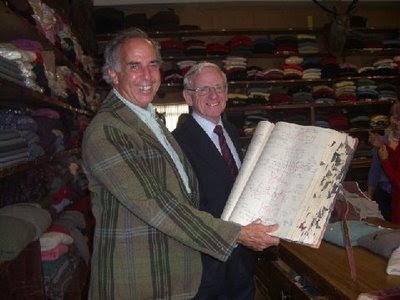 And there it was. The picture shows Tim Krech with Mr Campbell holding the book which his grandfather, also from California, signed in 1971 when the jacket Tim is wearing was ordered.

And there it will remain, long after 2008 internet purchases, (and probably many of the goods themselves) are forgotten.
No comments:


I was going to write about ghosts today - seemed appropriate for Hallowe'en and at Scottish Clans and Castles we are planning a self guided tour of haunted places for 2009.

But then I opened my Sunday paper and saw myself quoted in connection with the upcoming (?) Outlander Film based on Diana Gabaldon's novels. I had put Brian Pendreigh, the journalist, in touch with some of our Outlander tourists for ideas as to who should play the lead parts.
'My personal pick for Jamie Fraser is Gerrard Butler http://www.imdb.com/media/rm2194444800/tt0402057' wrote Macy from Arkansas, ' (in fact, I can't see anyone else playing the part - if you have seen Beowulf and Grendel or Atilla you will know what I mean'.
Dawn from Minnesota is voting for Tony Curran. 'He's worn a kilt in many movies so he wouldn't be afraid to wear one again!'

As you can see Pendreigh favours James McAvoy and Keira Knightley (above). Feel free to join the debate!