The Scots who migrated to Bath.


The mineral-rich hot springs of Bath, Somerset, England still bubble away, as they did in Roman times. As they did in 1687 when Mary of Modena, wife of James II, visited there desperately hoping for a healthy child and nine months later James, father of 'Bonnie Prince Charlie', was born. As they did when it was the most fashionable resort in Georgian times.

Unusually, I was in Bath over Hogmanay, attending a wedding in the wonderful 16th century abbey. Drawn back there next day my eye wandered over the 641 marble plaques on the walls and saw a remarkable number of Scots featured. I started to write down the details and whilst I certainly did not get them all, I noted 31; details are below (but 100% accuracy is not guaranteed). 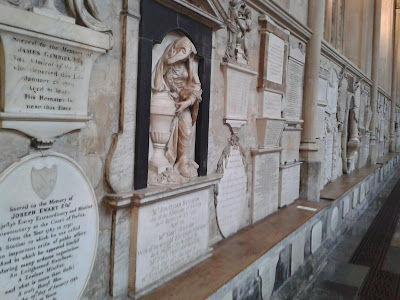 Two of those so honoured are from Hawick, 330 miles from Bath. Two refer to Lord Reay whose seat was at Tongue on the north coast, 640 miles from Bath... big distances in the late 1700s! So what were they all doing there?

I have half an answer. Many were ex-military or ex-Civil Service and having served all round the world, joined others in fashionable Bath, inhabiting those famous Georgian houses and hoping that the curing waters would prolong their lives. I can also vouch for the fact that it is a little warmer there in winter. But still, if Scots lay claim to 5% of all the plaques, was fashionable Bath really 5% Scottish in the 18th century?


The list of those remembered in Bath Abbey (chronological order). 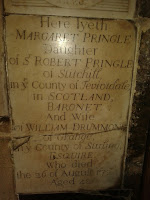 Margaret Pringle, daughter of Sir Robert Pringle of Stichill in the County of Teviotdale, in Scotland, Baronet and wife of William Drummond of Grange in the County of Stirling Esq, who died 26th August 1728, aged 48.

Sir Patrick Houston of Houston in North Britain, Baronet who died 24 March 1785 in the 43rd year of his age.

Charles Lockhart of Muiravonside in the County of Stirling, died 3 February 1796, aged 55. 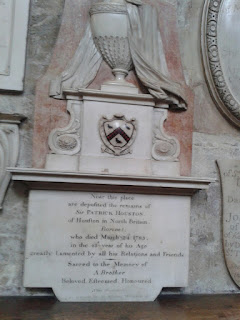 John White Melville of Bennochy and Strathkinnes in Fifeshire, Scotland, died 27 May, 1813, aged 59.

The Honourable Colonel Cosmo Gordon, brother of the late Earl of Aberdeen and Uncle to the present Duke of Gordon, died 27th February 1813 in his 76th year. 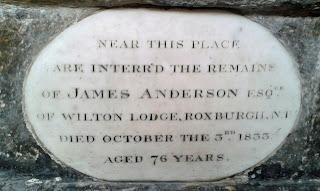 Col the Hon Aeneas Mackay, 3rd son of the 2nd Lord Reay who died in the service of the States General. His descendants settled in the Netherlands and to them the Scottish Barony descended in 1875.
No comments: